Experiencing Europeanization in the Black Sea and South Caucasus 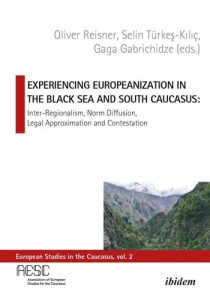 European Studies in the Caucasus, Vol.2

Experiencing Europeanization in the Black Sea and South Caucasus

This second volume demonstrates this by looking into forms of inter-regionalism in the Black Sea–South Caucasus area in fields of economic cooperation, Europeanization of energy and environmental policies, discussing how the region is addressed in the elaboration of a new German Eastern Policy.

In the section on norm diffusion, the contributors assess the normative power strategy of the EU and its paradoxes in the region, its impact on civil society development in Armenia, and democracy promotion in Georgia. In the section on legal approximation, issues of a global climate change regime and competition law in Georgia as well as penitentiary governance reform in the South Caucasus according to EU standards and policies are analyzed. All contributions also review regional or local contestations for the topics discussed here.

Oliver Reisner is Professor in European and Caucasian Studies at Ilia State University in Tbilisi (Georgia). After earning his Dr. phil. in East European History at Georg August University in Göttingen in 2000, he worked as coordinator for the MA program “Central Asia / Caucasus” at Humboldt University Berlin (2000–2003), served as human rights manager of an EU-funded civic integration project with World Vision International (2003–2005) and operations manager at the Delegation of the EU to Georgia (2005–2015). He published articles on Europeanization, religion, specifics of civil society in Georgia, and authored the Georgia country reports for the Bertelsmann Transformation Index 2016, 2018, and 2020. He is board member of the Association of European Studies for the Caucasus (AESC) and member of the advisory council of the European Journal of Minority Issues (EJM).

Selin Türkeş Kılıç is Associate Professor at the Department of Political Science and International Relations of Yeditepe University in Istanbul. She is the coordinator of the Jean Monnet Module European Union: Deeper Integration by Overtaking Crisis (2019–2022). Her research focuses on the discursive and argumentative processes in the policy-making of Turkey and the European Union. Her publications appeared in various internationally edited books and journals including Journal of European Public Policy, Turkish Studies, and European Foreign Affairs Review.

Gaga Gabrichidze is Professor and holds the Jean Monnet Chair in EU Law at the New Vision University in Tbilisi (Georgia). Much of his research focuses on issues of constitutional nature in the field of EU law as well as law approximation and migration law. Being a pioneer in the field of EU legal studies in Georgia, he has written widely on the legal issues related to EU–Georgia relations and is author of a leading textbook on EU law in Georgian language. He is co-founder and the President of the European Union Studies Association (ECSA Georgia) and co-founder of the Association of European Studies for the Caucasus.